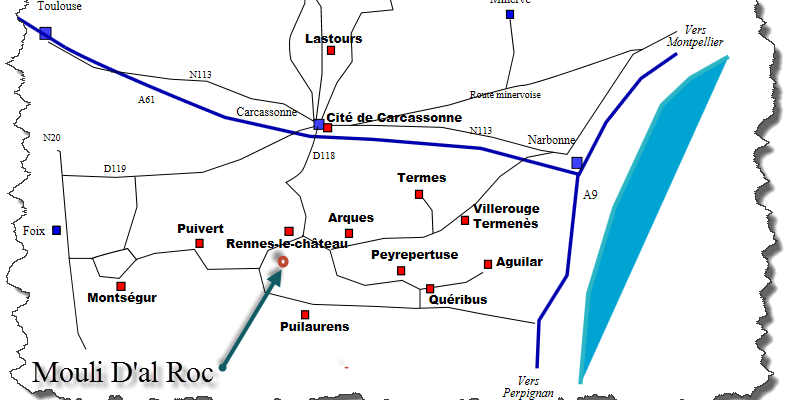 The Languedoc Roussillion region and history is home to some of the most historical and spectacular medieval castles  in Southern France. The Fortifications of Carcassonne date back to 100 BC where Romans used the natural hill top to guard their western empire.

In the 13th century the fortifications of Carcassonne, Montsegur, Peyrepertuse, Puilaurens and Queribus  were used by the Cathar religious order before being imprisoned and tortured by the French army during a Papal Legate.

Up to the signing of the ‘Treaty of the Pyrenees’ in 1659  the  fortifications of Carcassonne, Peyrepertuse, Queribus, Puillaurens, Termes and Aquilar were  used to guard the border between France and Aragon of Spain. After the signing of the Treaty the forts lost their military significance  and were demobilized and turned over to civilian use.

The village of Rennes le Château with its Masonic church and Templar connections  is also part of the region. The  Col St Louie which is located close to Mouli D’al Roc was once used by Hannibal and his elephants on his military campaign as they crossed one of the Pyrenees lowest passes