Carcassonne is the largest fortified Medieval City in Europe. The Romans fortified the hilltop around 100 BC to help guardian their western empire. Parts of the of the Romans fort still exist in the lower courses of the northern ramps. 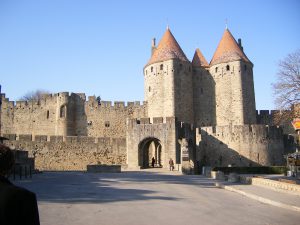 In the early 13th  century the city was used used by the Occitan Cathars during the Albigensian Crusades. The crusading Papal army forced the Cathars to surrender.

The fortifications were used to guard the frontier between France and the  Kingdom of Aragon / Spain until 1659, when the ‘Treaty of the Pyrenees’ transferred the region to France. After the treaty was signed the fort lost its military significance and the city became an economic centre.

In the 19th century the city fell into such disrepair the French government were considering demolishing the fort. The Mayor of Carcassonne lead a successful campaign to preserve the fortress as a historical monument. The controversial restoration was undertaken by the architect Eugene Viollet le Duc.

Carcassonne has been used for the filming of Robin Hood Prince of Thieves staring Kevin Costner, Morgan Freeman and Alan Rickman. The historical television miniseries Labyrinth was also filmed in the city.